No matter where you may find yourself in the United States, chances are high that you are within a stone’s throw away from ordering a burrito. The traditional Mexican dish is ubiquitous from coast to coast, which is something that you will not hear anyone complain about. There are so many varieties of burritos, and they are incredibly delicious, well, depending on where you get it from, of course.

Here at Los Amigos Latin Bar & Grill in Forest Park, we are proud to serve authentic Latin food, including burritos! We use only the best ingredients and make sure that your taste buds are satisfied with every bite that you take. While we know that you have a full understanding of what a burrito is, you probably don’t know the actual history of the dish! That’s why this blog post is all about the origins of the burrito and what made it so popular around the world! If you have any questions for us, reach out to us today, or come on by to try our food for yourself!

The actual origin of the burrito goes back a long way to the Mesoamerican peoples in Mexico around 10,000 B.C. Much of their diets revolved around corn tortillas to wrap their food, however, these weren’t quite like the burritos that we have today. They were usually filled with items such as tomatoes, mushrooms, squash, or chili peppers. You may be surprised to learn that the modern burrito that we all know and love came around much more recently than you may think. It was first mentioned in the 1895 Diccionario de Mejicanismos and was described as a rolled tortilla filled with meat or other ingredients.

Where the name derived from is up to debate. In Spanish, the word “burro” means donkey, and “burrito” is the diminutive form, so it translates to “little donkey”. There is a common folk tale that says that the name began with a vendor in Chihuahua during the early 1900s by the name of Juan Mendez, who wrapped his food in flour tortillas in order to keep them warm and would transport his items on his small donkey. While this story is fun to imagine, it is most likely untrue. The most credible theory is that it derived from the people of Sonora who invented the burrito because it made traveling with their food simple. No matter what the actual origin is, we can all just be happy that someone, somewhere invented the delicious food!

Popularity in the United States

The burrito didn’t become popular in the United States until the mid-20th century. Likely, it first was introduced by migrant workers, but quickly gained traction. The first reference to the burrito was at the El Cholo Spanish Cafe in Los Angeles. It didn’t take long for it to become an incredibly popular plate all throughout the country. Burritos became even more widespread when companies began freezing them (don’t worry, our burritos are never frozen!). These days, it isn’t just Mexico or the US that you can order a burrito, but all throughout the world.

As we are sure that you are aware, the burrito craze has not settled down, and now there are so many different options for you to choose from. Breakfast burritos have become a favorite morning meal, and the filling options are nearly endless these days. From steak or chicken to just beans and cheese, you are sure to find a burrito that fits exactly what you are craving on any given day.

While you certainly have a variety of places to choose from when you are in need of a burrito, don’t hesitate to be picky! There are so many delicious flavors and ingredients in an authentic burrito that you just will not get if you go to a fast-food restaurant or grab one at a gas station. If you don’t believe us, then we highly recommend that you visit our Latin restaurant here in Forest Park. Even if you don’t want a burrito, we offer some of the most beloved traditional foods from Latin countries, including Colombia, Peru, El Salvador, and more. Be sure to check out our menu, and give us a call if you have any questions! 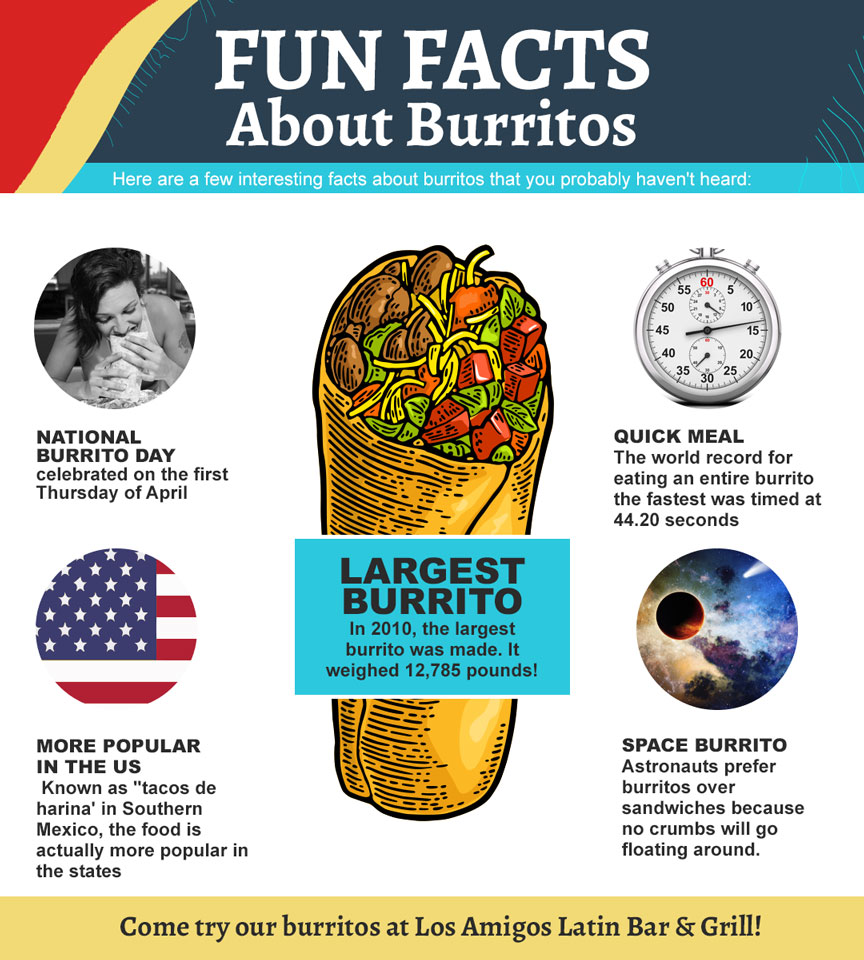